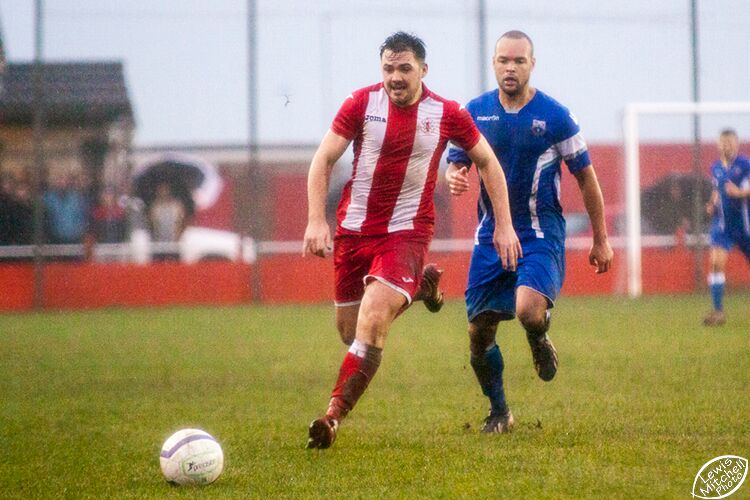 Despite being without 5 regulars we still overcame Monmouth 3-1. Josh Doyle, Dan McGrath Sacha Walters all returned while Josh Webber started having been on the bench in the previous game.

We kicked off and immediately attacked down the left, the ball was played into the box but just behind Mark Jones and the ball was cleared. We continued to put pressure on the Monmouth defence and they were having trouble clearing the lines.

Liam McCreesh found Mark Jones just inside the Monmouth half, he made his way towards goal and as he got to the edge of the area he squared the ball but a Monmouth defender managed to clear. We picked the ball up and found Josh Webber on the right, he cut in but failed to get any power in his left footed shot. Monmouth finally got into the Lido half on 8 minutes and were awarded a free kick 35 yards out which Lewis Davies wastefully shot over the bar. Josh Doyle then played Mark Jones in but he was crowded out and couldn’t get his shot in. On 14 minutes the ball was played wide to Josh Webber who was beating his defender with ease, he played the ball in to Sacha Walters but his shot went wide. On 25 minutes Elliot Thomas played the ball forward for Mark Jones to run onto.

The Monmouth keeper came out of the area, appeared to handle the ball and certainly fouled mark. We were awarded a free kick 20 yards out in a central position with the keeper receiving a yellow card. Sacha Walters took the free kick, he beat the wall but put his kick wide of the post. On the half hour, great work by Sacha Walters and Josh Webber set up Mark Jones from he shot over the bar from a tight angle. Typically after soaking up all this pressure Monmouth in the final minute of the half finally got into our area and scored. The ball was played behind Carlos Indjai and Lewis Clare shot past Steve Cann to give the visitors an unlikely half time lead.

We were level within 6 minutes of the restart, the ball was played wide to Mark Jones, he got into the box and squared the ball for Elliot Thomas to guide it just inside the far post. Monmouth pushed forward and only a couple of blocks from Carlos Indjai prevented them from going back into the lead.

Then on 58 minutes a great tackle and then a break by Josh Doyle set us on the front foot again. He played the ball wide left to Sacha Walters who won what turned out to be an unproductive corner. Monmouth were looking more dangerous than they did in the first half and from another free kick Stave Cann came out to claim the cross and clear the danger. We went ahead on 64 minutes following a free kick for a Monmouth offside. The ball was played to Josh Webber and his cross wasn’t dealt with and fell to Sacha Walters who from 10 yards scored with a right footed shot.

Two minutes later Andre Griffiths was fouled what appeared to be inside the area but the referee gave us a free kick outside. Sacha Walters laid it back to Sean Hanbury but his shot went just over the bar. Josh Webber was unlucky on 72 minutes, Mark Jones played the ball square for Josh Webber and from 25 yards he hit a screamer which hit the crossbar, bounced down and was cleared. Again we set up Josh but from a wide angle he shot wide of the far post.

On 79 minutes we played the ball wide for Mark Jones who seeing the keeper off his line tried a shot which went just wide of the far post. Inside the last 10 minutes and we had a period of Monmouth pressure as they looked for what would have been an undeserved equaliser. Andre Griffiths relieved the pressure and played a great ball wide to Sacha Walters, he got into the box and was tackled by two defenders with the referee deciding they had played the ball. With 4 minutes to go a Mark Jones header was tipped over the bar by the keeper although it appeared the linesman flagged for offside.

A rare mistake by Liam McCreesh almost set up an equaliser with 2 minutes to go when he passed it straight to a Monmouth player but their shot went just wide. We finally made the game safe on 90 minutes when substitute Shane Williams went down the left, played it in to Elliot Thomas who did brilliantly to create space and find Mark Jones at the far post and he headed in the third.